"There's a method to the madness, I'm just not always sure what the method is."

I've missed a couple of practice blogs this week, so this will be summary of the highlights. This week I covered some self-defense concepts with the junior students at Goshin Jitsu. The self-defense progression that I follow is:

Awareness/Intuitive Response
The first thing people need to do more of is paying attention to both their environment and themselves. We spend a lot of time training for self-defense, but then lose that by first not acting on what we perceive and then not listening to our inner voice. Observe who approaches you and assess their threat level. If despite your keenest observation nothing appears wrong but still feels wrong, listen to yourself (a lá "Use the Force, Luke)!
One of the drills we use is to partner up and then close our eyes, you have to describe physical characteristics of your partner. A variation is to engage in intense physical activity (such as pitterpat) before closing your eyes to model the "blood deficit" to the brain in moments of stress.

Exit Strategy
Live to fight another day is an axiom of self-defense situations. Before the fight starts, the consideration of how you will extract yourself as well as friends and family from the scene must be performed. High levels of awareness can lead to immediate tactical withdrawal avoiding an altercation, and goes in the "win" column.

Fact Check
Note this does not have to occur in the middle of the altercation but are issues to consider briefly in the now and extensively beforehand. 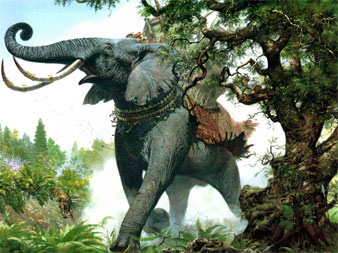 One way to consider the use of your hands and arms in a fight is to think of yourself as a series of walls in a medieval castle. That is, if that castle could move (say we stack on the back of an gigantic elephant). Anyway to invade a castle, the aggressor must break through several walls, each of which can launch waves of defenders and weapons. Each set of walls has a strategic worth and goal, they are used and discarded as the battle changes. A self-defense situation is similar, we must use our hands as range finders, methods of communication, and an arsenal of striking and grappling weapons.

Ranging Perimeter/"Barbican"
The first defense encountered in a castle is the Barbican. This is the same concept as the Fence described by Geoff Thompson (see "Dead Or Alive: The Choice Is Yours : The Definitive Self-Protection Handbook" (Geoff Thompson), "Art of Fighting" (Geoff Thompson), and "Three Second Fighter : Sniper Option" (Geoff Thompson)). Essentially, extend your arms palm towards your attacker in a very placating posture, using your hands to "bounce" of their forward pressure. After one or two bounces action is required and a new wall of the castle comes into play or we go directly to the Engagement phase. The Fence is an excellent point in which to perform psychological warfare on your aggressor via "verbal jujitsu" (Thompson describes several brilliant strategies such as yelling "I don't want to fight" an instant before blitzing your opponent). 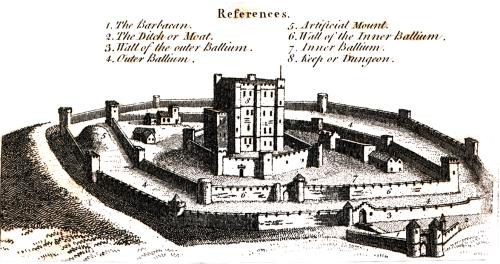 The set of walls between the barbican and the castle proper is called the Bailey (Ballium in Latin). These are thicker walls with more counteroffensive tools. This is the S.P.E.A.R. system described by Tony Blauer. Essentially the S.P.E.A.R. system uses a generally applicable, simple, trained flinch response to enter the Engagement phase.

Covering/"Keep"
The Keep walls are only used in defense when the preceding walls have fallen. That is, you've done multiple things wrong to get to this point. You are either being pummeled mercilessly or in a bad position on the ground. Covering up, minimizing damage, and then using micro-adjustments in position to reestablish control, e.g. clinching and controlling the centerline or shrimping out of sidemount.

Engagement
Finally, in scant seconds, the engagement begins following scouting of our foe, analysis of intelligence, and (hopefully) breaking them on the walls of our "castle". This is all the "martial arts stuff" be it striking, throwing, or submission but necessarily follows the progression described above. We cannot hit someone unless we first defend their attack. A throw or takedown off an attack needs a set-up, no matter how minute. Different styles have different primary targets, jeet kune do seems to like the eye ball and groin, while krav maga has a preference for the throat and knee. I like all of 'em:

As mentioned previously I've been adapting my "stance" for training in different combat sports. But rather than thinking of these fighting postures as three unique concepts I think of them as three variations on a central theme. I like using the opposite corners of a box as the two reference points for my feet. All three have bent knees and are light on the balls of the feet, I don't like to bounce, as is typically done in boxing. I try to remain as erect as possible with my hands high and tight on my head in Thai boxing since the threat of takedowns is so low but the head shots are so high. I prefer to have my line of sight above that of my opponent, it means that I have longer limbs then they do and can hit from further away. If not I need to close and work from the clinch.
For MMA my hands remain in their high guard, but due to the increased threat of takedowns I have widened and lowered my stance. I still try to stay light on my feet but I want to make sure that my opponent has to go through my line of sight to shoot. I don't lower myself as much as when I wrestle because this decreases my punching efficiency too much and completely kills my kicks and knees.
Finally, for wrestling I like to use a long low stance, loaded on the balls of my feet. My arms drop so that my "elbows are in my hip pockets", takedowns are the threat here, not punches to the head. I lose my erect posture to drop me lower than my opponent's line of sight. They will have to cross this line for the majority of takedowns and I'm better set up to arm drag or obtain underhooks.
It should be noted that level changes in striking and wrestling are the same. We bend our knees to bob and weave or to throw body punches in a surprisingly similar manner to the level change used to shoot. Thus these stances are not static and immutable, instead they are the central reference point to which we return after altering arm or leg position, level, or range.